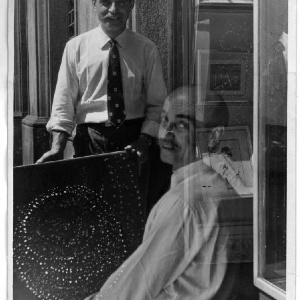 Lucio Fontana (1899 – 1968) was an Italian sculptor and painter. He became one of the protagonists of the Italian abstractionist movement, exhibiting his famous non figurative sculptures at the Milione in 1935 in a solo exhibition that marks the first exhibition of abstract sculpture in Italy. In 1949 Fontana presented at the Galleria del Naviglio Spatial Environment in black light, which marked a first revolutionary expression of spacialist theories. At the beginning of the 1950s Fontana discovered in neon light a congenial means of expressing the language of spacial art.