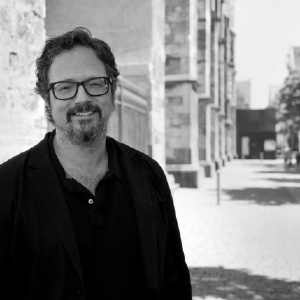 Rafael Lozano-Hemmer (b. 1967) develops participatory installations at the intersection of architecture and performance art with a particular interest in radical empiricism and critical social practice. Pushing public engagement to its limits, many Lozano-Hemmer works are activated with viewers’ biometric data such as their heart rate, breath, voice and fingerprints, measured in real time through sensors, cameras and microphones. Lozano-Hemmer was the first artist to represent Mexico at the Venice Biennial in 2017. He received the title of Compagnon des arts et des lettres du Québec (2016), the Governor General’s Award in Visual and Media Arts (2015) and two BAFTA British Academy Awards for Interactive Art (2002, 2003), among others.
Notable projects include Border Tuner (2019), which connected communities across the US/Mexico border with interactive light “bridges” that enabled conversations between participants on either side; Cloud Display (2019), a voice-recognition fountain that writes texts in midair using cold water vapour; and Solar Equation (2010), a faithful simulation of the turbulence at the surface of the sun projected on the world’s largest spherical aerostat, flying over Federation Square in Melbourne. His work is featured in the permanent collections of the Museum of Modern Art in New York, SFMOMA in San Francisco, MUAC in Mexico City, and the Tate in London.