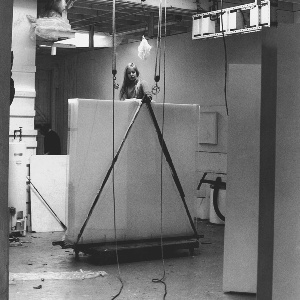 Mary Corse (b. 1945) investigates materiality, abstraction, and perception through the subtly gestural and precisely geometric paintings that she has made over her fifty-year career. Earning a BFA in 1968 from Chouinard Art Institute, Los Angeles, Corse developed her initial work during the emergence of the Light and Space movement in Southern California. Throughout the 1960s, she experimented with unconventional media and supports, producing shaped canvases, works with plexiglass, and illuminated boxes. Corse’s art emphasizes the abstract nature of human perception, expanding beyond the visual to include subtleties of feeling and awareness.
Corse’s work has been included in historically significant group exhibitions, including Pacific Standard Time: Crosscurrents in L.A., Painting and Sculpture, 1950-1970 at The J. Paul Getty Museum, Los Angeles (2011); and Phenomenal: California Light and Space at the Museum of Contemporary Art, San Diego (2011). In 2018, the Whitney Museum of American Art opened the solo exhibition A Survey in Light which travelled to the Los Angeles County Museum of Art in 2019. Her work is held in numerous public collections worldwide, including: The Menil Collection, Houston; The J. Paul Getty Museum, Los Angeles; The Museum of Contemporary Art, Los Angeles; Solomon R. Guggenheim Museum, New York; and Whitney Museum of American Art, New York, among others.