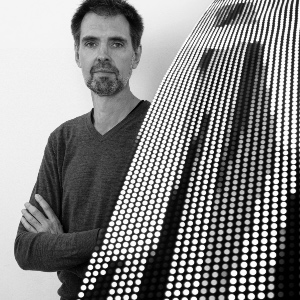 Daniel Canogar (b. 1964) was born in Madrid to a Spanish father and an American mother, with his life and career split between Spain and the USA. Photography was his earliest medium of choice, receiving an MA from New York University at the International Center of Photography in 1990, but he soon became interested in the possibilities of the projected image and installation art.