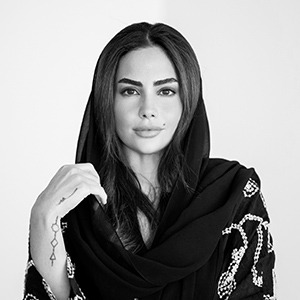 Jumana Ghouth was born and raised in Jeddah, she graduated with a BA in Design and is currently obtaining her MA in Intercultural Practices from Central Saint Martins, University of Arts in London. Jumana joined ATHR in 2011, the first contemporary art platform in the kingdom, where she was the Curator and Exhibitions Manager.

During her 7 years at ATHR, she represented artists like Nasser Al Salem, Dana Awartani and Ahmed Mater, and curated numerous shows including Nasser Al Salem first solo show ‘And It Remains…’ (2012), ‘The Language of Human Consciousness’ (2014), a group exhibition of 38 local and international artists including Richard Deacon, Sol LeWitt, and Monir Farmanfarmaian, ‘Why Is The Power Button Always A Circle’ (2015), a curated booth at Art Basel Hong Kong, and finally curated ‘Drumroll, Please’ (2019) Ahmed Maters first solo show in the Kingdom. She later became the Head of Arts & Culture at King Abdullah Economic City, where she commissioned a public sculpture by James Clar, before moving to the Ministry of Culture later that year, where she was heading the Public Engagement department at Jeddah Historical District Program (2019 – 2021).

She now works as an independent curator based in Jeddah, Saudi Arabia.