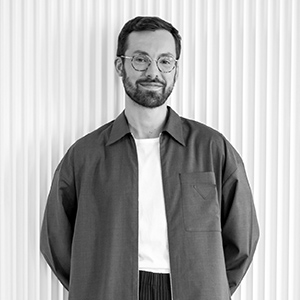 Born in 1987 in La Tronche, France, Arnaud Morand is an expert in cultural and creative industries, digital projects, and curatorial practices, with a focus in the Middle East region. He is currently Head of Creation and Innovation for the French Agency for AlUla development (Afalula), where he is supporting the Royal Commission for AlUla (RCU) in the implementation of its cultural programming strategy and the development of its cultural assets. He recently co-curated the first AlUla Artist Residency and is onboard several regional and international artistic initiatives as an independent curator.

For Noor Riyadh 2022, Morand worked with festival curators as a curatorial adviser.

He previously worked in Abu Dhabi as a cultural attaché for France. He supervised the opening of Louvre Abu Dhabi and curated a two-year interdisciplinary program co-produced by the Abu Dhabi Ministry of Culture and Youth and the French Institute. This focused on themes such as contemporary creation and artificial intelligence and included artists and cultural organizations such as Mohammed Bourouissa, Zined Sedira, Mourad Merzouki, Gauthier Capuçon, Bartabas, the Paris National Opera, Sorbonne University, the Arab World Institute, Abu Dhabi Art, and the Sharjah Art Foundation. Before that, he was in charge of strategic development at the Centre Pompidou in Paris and led partnerships at the Gaîté lyrique, the French institution dedicated to post-internet art.

He holds a Master’s degree in public affairs and cultural project management from Sciences Po Paris and UC Berkeley, and a Master’s degree in sociology from Grenoble Pierre Mendès France University. He obtained a diploma with honours as a pianist from the French National Conservatory of Music and Dance, and studied ballet and contemporary dance there as well.