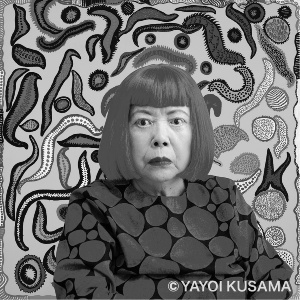 Yayoi Kusama (b.1929) is an avant-garde artist and novelist. She has created fantastical paintings using polka dots and nets as motifs since childhood. Kusama went to the United States in 1957, where she showed huge paintings, soft sculptures and environmental art employing mirrors and electric lights. In the latter 1960s, she organized many happenings and engaged in fashion designing as well as film production. Her original works and activities which made a big impact on the art world established her status as an avant-garde artist. Since her return to Japan in 1973, she has continued to show works both in Japan and abroad, and exhibited open-air sculptures in various parts of the world. Working energetically on new art pieces, she plays an active part in artistic activities, often traveling the world for exhibitions of her works.