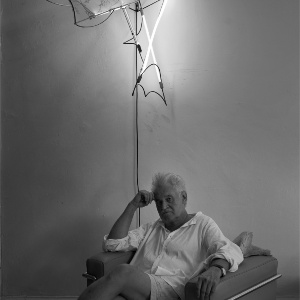 Keith Sonnier (1941 – 2020) radically reinvented sculpture in the late 1960s. Employing unusual materials that had never before been used, Sonnier, along with his contemporaries, Bruce Nauman, Richard Tuttle, Eva Hesse, Richard Serra, and Barry Le Va, called all previous conceptions of sculpture into question. Sonnier has experimented with materials as varied as latex, satin, bamboo, found objects, satellite transmitters, and video. In 1968, the artist began working with neon, which quickly became a defining element of his work. The linear quality of neon allows Sonnier to draw in space with light and color, while the diffuseness of the light enables his work to interact on various architectural planes.