Born in 1938 in Boulogne-Billancourt (Paris), France, Daniel Buren declares that he lives and works in situ, emphasizing the fundamental importance of the sites in which and for which he creates. He has thus transfigured twice the Guggenheim Museum in New York in 1971 and 2005 and the Cour d’honneur of the Palais Royal in Paris in 1986.

For the past fifty years, Daniel Buren has been pursuing a radical work thanks to a “visual tool”: alternating white and colorful 8.7 cm wide stripes and a work in situ.The work becomes inseparable from the site, which reveals its hidden dimensions, and the eye suddenly sees “differently”. If Daniel Buren’s artistic work, theoretical reflection and modes of intervention have changed the understanding of contemporary art, the artist’s attachment to the primordial sense of vision, to color as a “raw thought”, as well as the latitude and pleasure of experimentation that he offers to the spectator, have also ensured his popularity with the general public. Daniel Buren has held almost three thousand exhibitions worldwide. 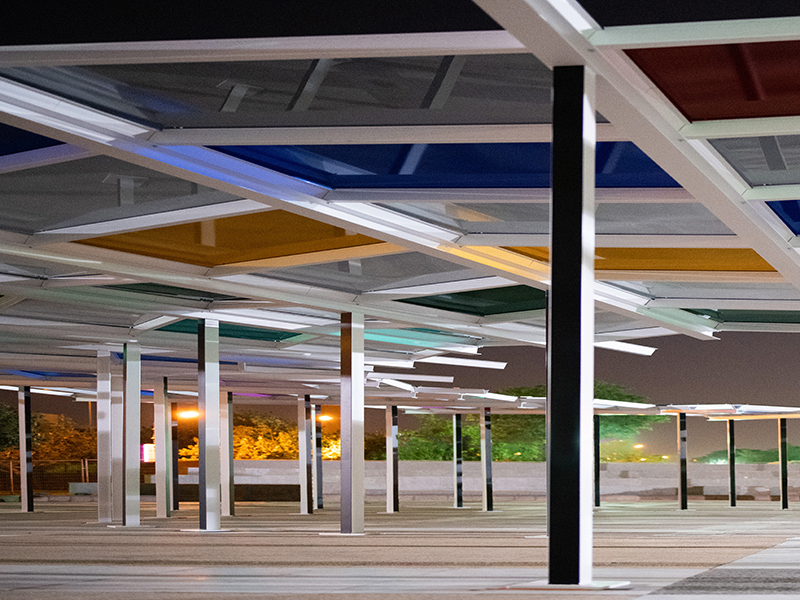 Le Ciel coloré et projeté, travail in situ, 2022
DISCOVER
GET IN TOUCH
CONNECT
This site is registered on wpml.org as a development site.